Trade Union Movement in Leningrad in 2005 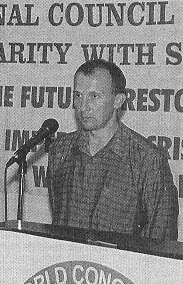 In 2005 in St. Petersburg and in Leningrad Region has been noticed an increase in the activity of trade union movement. The trade union of the dock workers of several stevedore companies in the seaport carried on a struggle for reaching a new collective agreement, workers of Coca-Cola picketed, the struggle of the Ford Motors’ trade union continued, seamen of the Portoflot were on strike, trade unions were organized at the Petersburg factories of the Dutch brewery Heineken, factories Pepsico, Caterpilar and Skania, the workers of the Pikalevsky aluminium enterprise actively interfered in the struggle with owners and trade union Zashchita Truda (Defence of Labor) was organized at the factory Electrosila. It is necessary to note not only quantitative, but also qualitative growth of the trade union movement. Not only a powerful splash of activity, which demonstrates the spontaneity and arbitrariness on the movement, but also the organized gradual growth must be noted. This growth has specific features:

An increase in activity and organization of the trade unions of St. Petersburg is evident. The globalization of the world economy leads to the globalization of the work force market and the establishment of the connections between the trade unions around the world. The time of the unprepared, hysterical demonstrations has passed. Not "measured step of the iron battalions of the proletariat" replaces it, but the organized struggle of the trade unions of workers with the use of all means: turning to law courts, negotiations with employers, strike, and so forth. Only being organized at this level, working class will be able to establish its authority and to destroy exploitation completely.

Close this page to return.