This article was written before the US/NATO Attack on Yugoslavia. We are including it for some background information on the war. 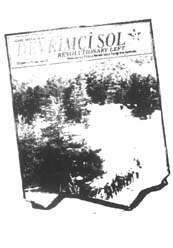 In the summer of 1998, a long-running conflict came to a head in former Yugoslavia -- in the southern province of Kosovo, as it is called by the Serbs, or Kosova, to give It its Albanian name. The name Kosovo will be used in this article, simply because this is what it is generally called in English-language texts.

Kosovo adjoins Albania proper, so the movement of people from there was relatively easy. Like oppressors throughout human history who ruled over a number of different subject peoples, the Ottomans played a game of divide and rule with ethnic groups. After the death of Skanderbeg, the last major Albanian rebel against the Ottomans, the majority of Albanians accepted Islam and Ottoman rulers used them as a counter to the Orthodox Serbs, stirring up animosity between the peoples. So large numbers of Albanians were settled in Kosovo, and Kosovo's population has been mainly Albanian since about the 16th century. Something like a third of the Albanians in the world live in Kosovo.

The decline of the Ottoman Empire caused this situation to unravel, especially after Serbia regained its independence in the 19th century. Kosovo was included within its borders, despite its largely Albanian population. Albanian nationalism existed (a superficially independent Albania dominated by Austria-Hungary was founded in 1912), but at first was a negligible factor. Before World War I, Austria-Hungary used Kosovo as a way to intrigue against Serbia. For example, it was falsely claimed in the Austrian press that Serbs in the Kosovo town of Prizren had assaulted the Austrian consul there, and this nearly led to war. When World War I did break out a few years later, Austria-Hungary played the old game of stimulating some types of national sentiment to combat others. So Albanian nationalism was stimulated by the Austrians, and some Albanian units were armed by them as a counter to the Serbs. In the age of modern imperialism as described by Lenin in "Imperialism, the Highest Stage of Capitalism," divide and rule is evident just as much as in the time of the mediaeval Ottomans.

Following World War I, Kosovo was back in Serbia as part of the newly-founded Kingdom of Yugoslavia. Non-Serbs, among them the Kosovo Albanians, justly complained of ethnic discrimination. The swift collapse of Yugoslavia under the Nazi German attack of 1941 (in a two-week campaign, the German forces lost only 560 killed, compared with about 5,000 in the attack on Greece, which also was not defeated quite so gruckly) was partly the fruit of the ethnic discrimination between the wars. The lack of unity between peoples made Yugoslavia an easy prey to external aggression. In the partisan warfare that followed, the German and Italian fascists tried with some success to exploit ethnic hatreds, recruiting many Kosovo Albanians into the Waffen-SS "Skanderbeg" division which committed atrocities against Serbs. Albanians were also killed in cold blood by Serbs. (It should be added that there were also Serb collaborators with fascism, especially those following a general named Nedic.)

After liberation, Albania and Yugoslavia were closely associated, but Kosovo remained a sore point. Albanian Communist partisans later stated that Tito's Yugoslav Communist partisans committed atrocities against Albanians in Kosovo during and immediately after the war. Such statements were not made public, however, until after Albania's break with Yugoslavia.

Yugoslavia regarded the Kosovo Albanians as a threat, not least because its relations with Albania itself ranged from bad to just short of war. Tito's deputy Rankovic became associated with a policy of systematic discrimination against Kosovo Albanians. Albanian separatism in Kosovo was blamed on Tirana, and indeed a constant propaganda war went on between Albania and Yugoslavia over Kosovo, hut Albanian discontent also had local roots -- Kosovo was one of the least developed parts of Yugoslavia during the Tito years.

And then Yugoslavia died, and even the pretence of maintaining relations hased on equality among nations died with it. Serbia has ruled Kosovo with an iron fist while the wars with the Croats and the Bosnians went on elsewhere. Tension and oppression continued in the 1990s, and came to a head this year. The Kosovo Liberation Army (KLA) consisting of ethnic Albanians, rose up against the Serbs. After claiming to control 40% of Kosovo, the KLA was beaten back by a Serb counter-attack which drove over 200,000 Albanians as refugees into other countries. The KLA have not been called "terrorists" for rebelling by the USA, which normally does not stint from applying such designations to liberation groups. The KLA are probably not considered to be a threat to US interests, and the Serbs are not considered to benefit them -- hence the US display of discretion.

That the Serbs are oppressing the Albanians is beyond doubt. An old game is once again being played in Kosovo. External forces are seeking to intervene in the situation. Fascists from Turkey are beginning to beat the Albanian nationalist drum. The Nizami Alem (World Order) organisation has appealed to the creation of a "Kosovo Volunteers Army," supposedly to provide humanitarian aid to Albanian refugees (Agence France Presse, August 18, 1998). Nizami Alem is associated with Turkey's BBP (Great Unity Party), itself a split from the fascist MLIP which is connected to the Grey Wolves. The BBP only differs from the MHP in that BBP propaganda is more Islamic. Fascists from Turkey are already known to have been involved in the fighting in Chechnya and Bosnia. At the end of the 20th century, it would appear that the authorities in Turkey are trying to play the Albanian card, rather like Austria-Hungary did when the century was still young. Fascists of all nationalities are in their element in a situation where the only "solutions" being offered are nationalist ones, in this case Serb versus Albanian.

The ones who have been victimised are the people. They were the ones who suffered with the break-up of Yugoslavia, and the exploitation of ethnic differences by fascists and imperialists. They are the ones suffering in the events in Kosovo. The only solution for the people of Kosovo, like others in the Balkans, is self- determination without interference by outside forces, and unity of the peoples against fascism and imperialism. Otherwise the age-old pattern of powerful countries and empires exploiting ethnic differences will be repeated yet again.

Close this page to return.